I wrote for the Daily Emerald from spring of 2016 up until January of 2018. I primarily covered football and men’s basketball.

Behind the Scenes with Oregon Equipment, Seeing What it Takes to be a Manager

The Oregon football team is known for its flashy uniforms, but there is so much work that goes on behind the scenes. From preparing the “game loops,” to being a ball boy on the sideline, the equipment managers do it all.

Long snapping isn’t the most decorated position in football, but that doesn’t mean it’s not important. Tanner Carew has played an integral role in helping the Oregon football team succeed.

It’s Truly “Next Man Up” for the Ducks Now 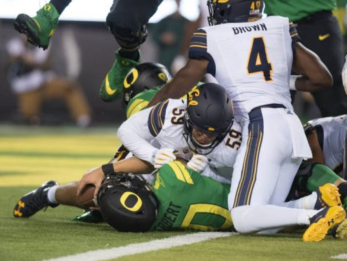 There was a brief silence among the stands of Autzen Stadium when quarterback Justin Herbert went down against the Cal Bears, but the Ducks fought on without him and many other significant players to win 45-25.

The Oregon men’s basketball team completed an undefeated home schedule with a 101-73 victory over Colorado. In true senior day fashion, it was the seniors who shined through on the bittersweet day.

Ever Since Dana Altman was hired as the head coach of the Oregon men’s basketball team, he’s brought in a steady flow of junior college talent. A junior college product himself, Altman has an appreciation for what junior college athletes have been through.

Oregon men’s lacrosse may just be a club sport, but with the help of head coach Markus McCaine, they get many of the perks of a true varsity team, including a deal with Nike.